"Out Of Sight Salsa"

at the Aladdin Theater in Portland, 8pm, 3017 SE Milwaukie.

The School of Piano Technology For The Blind, aka "Piano Hospital", in


They are the only school in the world that trains blind students and the visually impaired, older than high school, to become piano tuners and technicians.  This allows them the dignity of earning their own living after graduation from the 2 yr course.  Students come from 15 countries.  There have been 300 graduates  since the school was founded by Emil Fries in 1949.
www.pianotuningschool.org  501c3


The revenue raised from this event will be used to bridge the gap between the cost of the school and the tuition they are able to charge.  Tuition only covers 20% of the cost.  The school offers a highly individualized, hands-on education, and one-on-one instruction, that  allows students the optimum environment  in which to learn the intricacies of piano tuning.


69.6% of graduates of this school find careers in the music industry.  About 70% of the legally blind are unemployed or underemployed, and rely on SSI benefits.


Just  imagine learning your job as a blind person???


The concert will feature hot, sizzling Salsa Music, played by Ramsey Embick's 9pc Salsa Orchestra,  "Ramsey Y Los  Montunos".  The Oregonian says they are "one of Portland's hottest musical acts".  Also on the program will be an exciting salsa dance exhibition from the Gemini School of Salsa Dancing, featuring award-winning performers such as "Javier and Holly". 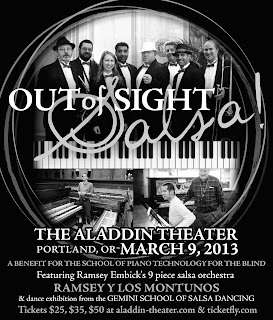 The students are funny, smart, dedicated, confident, and undaunted by their handicap.  Graduates have gone on to tune pianos for Elton John, Johnny Cash, Dave Brubeck, Billy Joel, Miles Davis, and Harry James among countless others.
Produced by
Northwest Artist Artist Management, www.nwam.com,
in Association with Norwood Brown